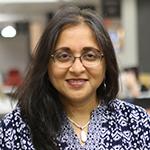 Chella Vaidyanathan joined Emory’s Robert W. Woodruff Library in 2016 as the European/World History and Philosophy Librarian. Prior to joining Emory she was the Curator of 19th-21st Century Rare Books and Manuscripts in the Department of Special Collections and Archives at the Sheridan Libraries of Johns Hopkins University and also the Academic Liaison Librarian for the Departments of History and Anthropology, the Center for Africana Studies, the Program in Latin American Studies, and the Program in Islamic Studies. From 2007 to 2010, she worked as the History, Political Science, and Government Documents Librarian at the University of Miami. She enjoys teaching course-specific bibliographic instruction sessions. Particularly, she loves integrating digital primary source materials, multimedia, and Web 2.0 tools like blogs, wikis, Flickr, YouTube, and others in her classes.

Chella is a member of the History Section of the Reference and User Services Association (RUSA), Western European Studies section (WESS), Asian African and Middle Eastern Section (AAMES), and Rare Books and Manuscripts (RBMS) Sections of the Association of College Research Libraries. (ACRL). Currently, she is the Vice-Chair/ Chair-Elect of the RUSA History Section and the Chair of the Nominating Committee. She also serves on the Executive Committee and the Gale Cengage Learning History Research and Innovation Award Committee of RUSA History. Chella has served in various committees of the different sections of the the ACRL. In addition, she has won numerous awards and honors including ALA’s 2009 Emerging Leaders Program Award sponsored by the Government Documents Round Table (GODORT) and the ACRL/AAMES Special Recognition Award twice for distinguished service as Secretary, Co-Chair of the AAMES Publications Committee, and Web Administrator. Chella was also a Fellow of the 2013-2014 cohort of Association of Research Libraries (ARL) Leadership and Career Development Program (LCDP). She has presented at several conferences including the National Joint Conference of Librarians of Color, Maryland Library Association, EDUCAUSE, ALA, and ACRL.