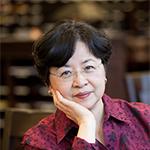 Before joining the Robert W. Woodruff Library in the mid-1990s, Guo-hua served as the head librarian of the School of Journalism & Mass Communication at the University of Wisconsin-Madison, a supervisor at the Fine Arts Library of Harvard University, and the Search Unit Coordinator of Boston University General Library.

Her scholarly publications include journal articles including “LLOLI: Language Learning Oriented Library Instruction” in the Journal of East Asian Libraries, “Introduction to the work on Missionary Archives to China” in China Index,  “China’s Higher Education Reform” in China Currents and Young John Allen’s Political Activities during Late Qing Dynasty through Two Manuscripts in 天禄论丛. Guo-hua Wang also published the book, "Guide to Archives of Missionaries to China Collected in Woodruff Library at Emory University" in both English and Chinese. It has become an important reference book for Chinese Studies scholars who are interested in the impact of missionaries’ work on Chinese history and the transformation of Chinese society. Her second book “Roads to Ivy League Colleges” has been translated into Chinese and published by an Educational Press in China.

Guo-hua Wang earned her BA from Anhui University in China, Master of Arts  in Library and Information Science from Rosary College, and a Specialist degree in Library Automation from the University of Wisconsin-Madison Graduate School. She is a member of Beta Phi Mu, an International Library Science Honor Society.